Kirika “They Are A Set” Akatsuki & Shirabe “Do Not Separate” Tsukuyomi

Kirika and Shirabe are so perfect together that I couldn’t bear to split them up.

They are inseparable, to the point that the two of them share a single brain cell.

Since their gears are named after the the children of the Sumerian god Zababa, I’ve taken to calling them the Zababies.

Together, I think they’re my favorite character in the series; I love these cute gay dorks so much.

Each of the Zababies has their own verbal tic that gives them their nicknames among fans. Kiri, loud and edgy as she is, carries on the venerable tradition of chuuni nerds who say “desu” or “dess” every chance they get, usually because it sounds like “death”. Shirabe, the quiet, observant one, falls back on the classic sound effect for staring, “JII~”.

Incidentally in summer 2013 - the same season as these two goofuses were introduced - a show called Kiniro Mosaic aired alongside Symphogear G, featuring a character named Karen who frequently made both of these noises. Look at her, she’s even got Kirika’s same hair tie! 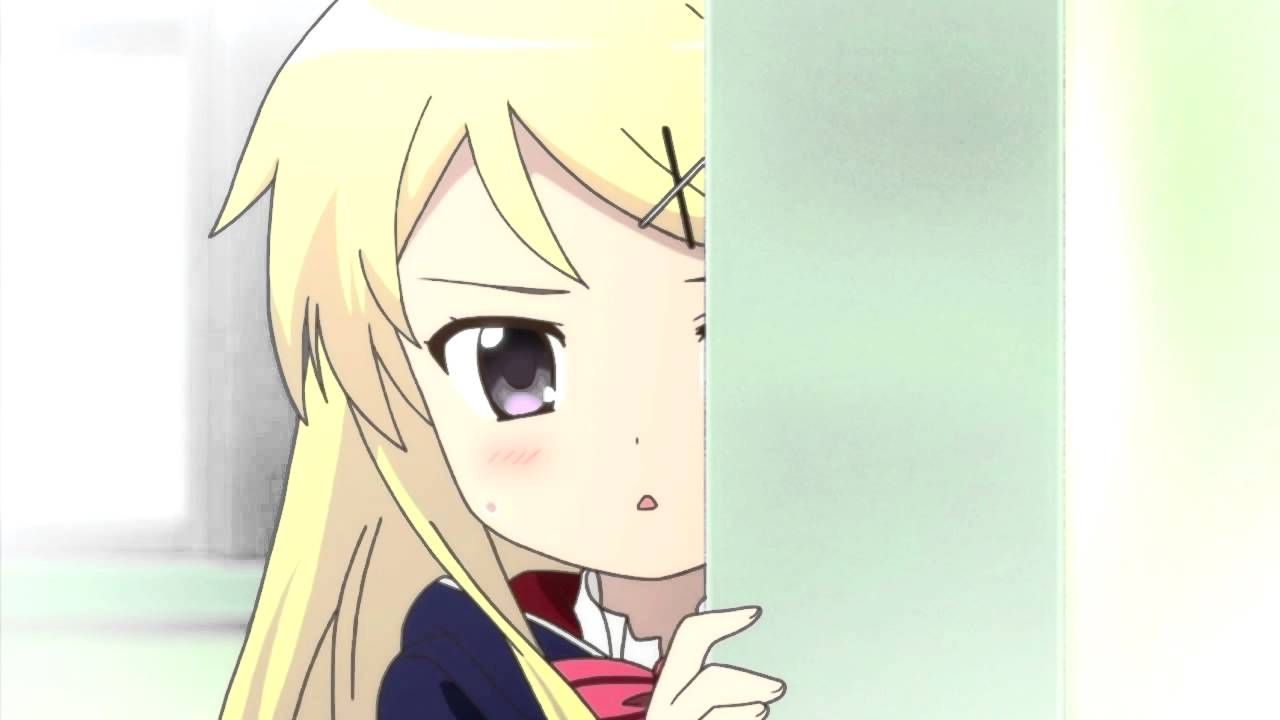 Even further off topic, I’d just like to let you know that digging through my images folder for all these Yu Gi Oh and Nanoha and Desu memes for this website was like taking a time warp back to 2007 when internet culture was dominated by demotivational posters and lolcats. No real reason for bringing this up, I just wanted to subject you to a taste of what I experienced working on this site.

Since my brain is now completely broken, please enjoy this collection of incredibly stupid videos that I can’t stop watching:

Anyway, back on topic. The Zababies are pretty much the Shaggy and Scooby of the group, always sneaking off on their own in their beautiful spy glasses to get up to some kind of mischief. These scenes are full of the goofiest reactions and the cartooniest animations and whoever has custody of their brain cell at any time (usually Shirabe) constantly has to try to keep the other one (usually Kirika) in line, it’s just a riot.

They get bonus points for their mission to quote-unquote “infiltrate” the school culture festival reminding me of one of my favorite parts of the original Macross, when the Zentradi spies come to earth and end up just having fun learning what music is.

But what really makes these lovable doofuses so lovable is how much they love each other. Kirika is the sun to Shirabe’s moon. They’ve been taking care of each other since they were orphans in the same gear experimentation facility as Maria, and the bond they’ve built is just magical. They’re always doting on each other, arguing like a married couple, going on about how they couldn’t live without each other… Like, there’s a whole scene where Kiri’s just like “Shirabe’s hand is so cold I can’t not hold it” and Shirabe’s like “I love squishing Kiri’s bicep” and if that isn’t what love is then, uh… I have to rethink some relationships I’ve had.

The Zababies’ songs are a lot of fun because they’re all written to go together, so when they join forces for a combo attack, the two songs can merge into a duet. On their own, Kirika - edgelord that she is - sings over a chaotic cacophony of metal, while Shirabe lays down the fripside-esque electronic beats. The Zababies mine some surprisingly deep emotional wells while being extremely silly, as they sing about:

Slicing through the tears of the past

Buzzsawing the cruel world to pieces

But then they come together in the chorus to proclaim their certainty that everything will be okay because:

I want to say I love you

The two of us are one

I won’t let go of your hand

And we’ll push through with the strength of our love

And their B-sides contain an exchange of letters back and forth.

Also of course Kiri’s songs all have a bunch of DESS puns in them, which fans get to shout during live shows.

They even do almost all of their battling together - Kirika wields the green Igalima and Shirabe has the pink Shul Shagana, which as I mentioned above are named after the children of the Sumerian god Zababa. Kiri’s arsenal consists of scythes and scythe accessories with edgy fairy-tale attack names in an illegible mix of japanese and English letters (which makes sense because she can’t read). Shirabe commands a BUZZSAW YOYO BARRAGE with names that mix buddhist terms with the greek alphabet. Yeah that’s right, she fires buzzsaws out of her twintails and occasionally dabbles in beyblades that turn into mechs.

The two of them attacking together results in some of the wildest combo attacks in the entire show. Like, look at this thing and tell me it’s not the greatest stupidest idea ever conceived.

And then the latest season had their ultimate combo attack called freakin’ Polyfilm Scissor Love Dreams and I just… not to sound like Chris here, but please do that at home, you two.

The full effect of the Zababies can only really be felt in video, but I’ll do my best to adapt with a turbo block of scenes picked out to showcase their cartoony goodness, their scooby-doo sneakscapades, and a great season 5 fight:

(I’ve got a fairly strong Kirika bias with these scenes, but given that Shirabe is the character who’s probably closest to my personality, and given how much she likes Kirika, is it really any wonder I like Kiri-chan so much?)

Kiri is such a cartoon character, I love it!

I’m so upset I can’t find a good OYOYO~ clip online because this sound needs to be heard to be believed.

Here’s that culture festival scene I mentioned earlier, for an example of their ~sneaky spy adventures~. (check out the clip on the official Symphogear Youtube channel)

If I can’t use the OYOYO clip I might as well include a bonus, so here’s some shots from their concert at the culture fest:

And a bonus video: The Safety Dess

Oh, food is also very important to them because they’ve always had so little of it growing up, so Shirabe’s had to make the most of what they had and become a fantastic cook