So uh… yeah, the plot. I guess Symphogear… kinda? Has one of those? The basic idea the show starts with is that there are these mindless blob monsters called Noise that pretty much just vaporize anyone they touch. Their only weakness is the power of music - or as the show calls it, “phonic gain” - which is channeled through power suits called Symphogears. Symphogears are derived from relics of ancient heretical technology and are only able to be worn by cute anime girls. It’s up to our heroes to use their songs to protect people from the Noise, find out who’s controlling them, and put a stop to their evil deeds.

Things… escalate from there.

Symphogear is a show with an extremely well-earned reputation for constantly trying to one-up itself.

And it doesn’t just try, it succeeds.

Not only does the story get progressively more ridiculous as the series goes on, but amazingly, while many anime tend to lose visual steam the longer they go on, each season of Symphogear sees a pretty stark INCREASE in production values. Let’s do a little comparison, shall we? Let’s see how far this little show has come since its humble beginnings. Here’s Hibiki’s transformation sequence from the first season, which aired back in 2012:

And here’s the one from season five, seven years later:

I’ll give you a second to scoop your jaws off the floor.

But What is it ABOUT?

Symphogear? It’s about bringing people together, finding ways of understanding each other.

The bonds of understanding that form between us

It’s about the bonds that form between us as we communicate to reach that understanding.

Music as a universal language

Music in Symphogear is meant to be a universal language that represents the formation of those bonds. I think Tsubasa sums it up best during a concert in season 1, when she says that “Even if we can’t understand each other’s language, I want to communicate through my music.”

Overcoming hardship through trust and friendship

Through these bonds, we can build trust, and form powerful friendships that can carry us through even the darkest of times.

And, most poetically, Symphogear is about how it’s not the understanding itself, but the PURSUIT of that understanding, the innate human desire to know each other more than we currently do, that leads us to love and care for each other. That to love each other - not despite our differences, but because of them - is what makes miracles happen. And that’s the point the show really tries to drive home in its conclusion.

Believing in the song in your heart

In the end, it’s about finding the song in your heart, one note at a time.

The Q U A L I T Y of Symmphogear

It’s a show that’s easy to watch with a “so bad it’s good” mindset, and part of me wonders if that might be the best way to start? That’s how my friends and I started back in 2012.

And really, can you blame us, when the show has the absurd plot and unsubtle writing that it does, and season 1 occasionally looked like this:

They did go back and fix that particular cut of animation for the BDs, at least, but don’t worry, the English is still intact, in all of its glory.

The Magic of Symphogear

So yeah, that’s what I started out with.

But something happened. Maybe the later seasons endeared me to it. Maybe I grew attached to the characters after spending more time with them. Maybe I got older, and realized that some measure of “objective” quality isn’t the end-all-be-all of a work of art, that what matters isn’t the number of plot holes or goofy animation mistakes, that what’s important is the joy it brings you, that “so bad it’s good” can easily be shortened to just “good.”

If you go in expecting ~~prestige TV~~ with tight, high-quality writing and complex, cohesive narratives with realistic characters, you’re gonna have a bad time. The story is essentially thrown together by the seats of its creators’ pants. Everything is so far over the top that it sometimes loses its grounding. Symphogear is a work of pure passion, and the best way to consume it is to just let it wash over you and feel that passion yourself. If you try to dig too deep on your first watch, you’ll only get lost and miss the forest for the trees.

What Symphogear has is something that is so often sorely missing in our cynical, lore-poisoned media environment:

It’s raw, and it’s messy, and that’s the appeal.

If you’re not used to that, if you need to fall back on the “so bad it’s good” mindset to appreciate that, that’s fine. That’s what 2012 me did. It’ll grow on you. And when you come back to revisit it like I did, having had its charm pounded into you by brute force, you’ll be able to meet it on its own terms and fully appreciate the heartfelt ambition and lovable characters that have won it a place in my heart. 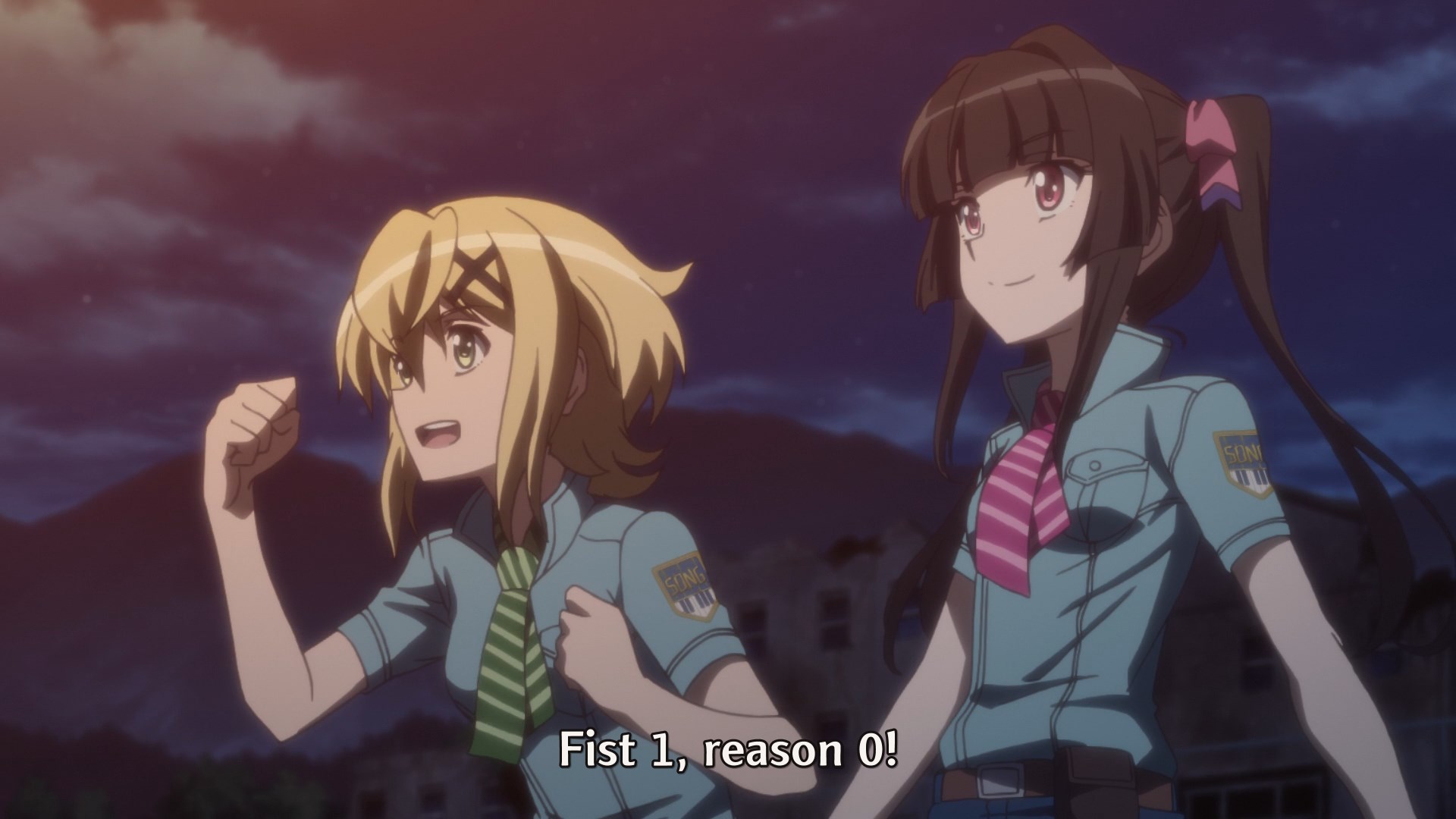