In the distance, that day, when the star became music…

After a little over a year to recover from what we’d all just experienced, July of 2013 blessed us with a second season, Symphogear G, and its marvelous tagline “In the distance, that day, when the star became music…”, referencing the lyrics to Tsubasa and Kanade’s song from the first episode of season 1. 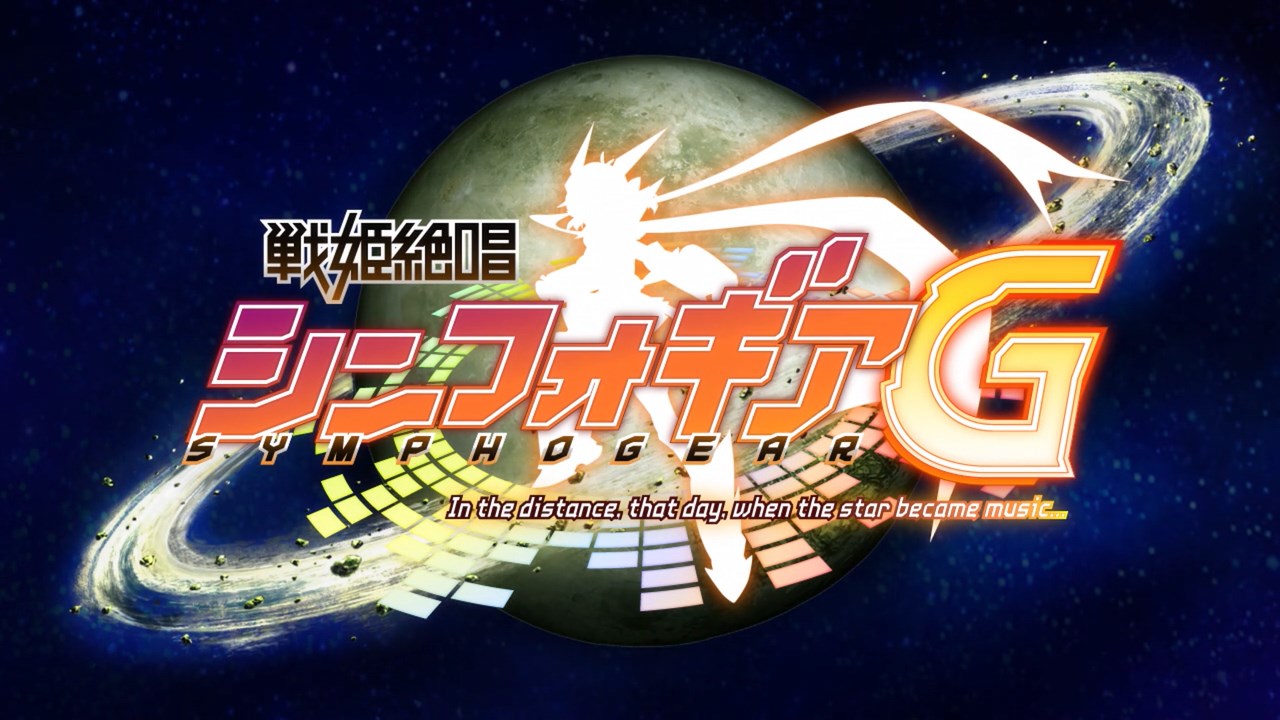 This is the season where they shuffled the staff around - changing up the character designer and director - and Satelight took over more of the production duties from Encourage Films (at least officially). And boy does it show in the animation: visually, G is a huge step up from S1. While I do miss the softer designs and weird/cool color filters of S1, the new look is extremely clean, and the jump in both the amount and consistency of animation is immediately eye-popping.

On the other hand, it’s not as thematically strong as season 1 IMO, and some of the seams in Symphogear’s trademark seat-of-the-pants plotting are more visible: they had to really reach to get some of the fights they wanted towards the end like Chris/Basa and Kiri/Shira and keep all six gears from getting together until the last episode (though it does kinda say something when your cast has such good chemistry that you have to try this hard to keep them apart).

Not only that - in addition to being an exhilirating ride on its own merits, everything it does to build on the first season feels like an essential addition to the series. As much as I love season 1, Symphogear just doesn’t feel complete anymore without Maria and her problem children.

The three of them spend this season as sympathetic bad guys, part of an anti-moon activist group claiming to carry on the will of Finé. Hibiki’s also stuck dealing with the Iron Man situation of having her relic lodged in her chest, and Chris has a great arc of both learning what it’s like to be accepted and undoing her mistakes from season 1. Miku even gets in on the Symphogear action, though not of her own choice.

And the villain plot? This one’s about a mad scientist, the leader of an anti-moon terrorist group, acting out a Pinky-and-the-Brain scheme to take over the world as efficiently as possible by taking cover in not-Atlantis while he crashes the moon into Earth because if everyone dies then he doesn’t have to conquer as many people.

Professor Nastassja (or “Mom” as she’s called) is a very conflicted mother figure to the orphaned children undergoing training in the F.I.S. Symphogear research organization (started by Finé, because of course it was). When a failed experiment brought an end to their facilities, she took three of those children under her care - Maria, Kirika, and Shirabe.

Mom is the kind of character who will do something terrible because it seemed like the best idea at the time, then feel bad about it later and take it upon herself to mitigate the damage. She put the Symphogear candidates through brutal training regimens and experimentation, but took them in and cared for them when they needed a home. She helped Dr. Ver gain the power to stop the moon from falling, but sacrificed herself to send it back into orbit when it was revealed that he actually wanted to crash it into the planet himself. She’s the epitome of “tough love”, with maybe too much emphasis on the “tough” part, but Maria and the girls do remember their time with her fondly (if potentially out of Stockholm Syndrome).

The real villain of Symphogear G is a mad scientist and self-proclaimed Last Action Hero with a name to rival Maria Cadenzavna Eve’s: Dr. John Wayne Vercingetorix. Voiced by Tomokazu Sugita fresh off his run as Joseph Joestar, and boasting an incredible array of faces to match, Dr. Ver somehow manages the feat of being the MOST EXTRA character in a show as extra as Symphogear, making him something of a fan-favorite villain (despite being kind of a creep). Please enjoy this curated selection of only the most exquisite Dr. Ver faces:

The not-so-good doctor aspires to be the greatest hero on Earth, even if he has to get there by default by being the last man standing. He’s recruited Mom and her Gear children to his cause, and with Finé gone, he’s the only one who knows the secrets of Symphogear tech. This knowledge, along with his monster Nephilim arm, gives him the ability to hack into just about anything, which he uses for… pretty much the same thing Finé does:

I love how much Symphogear villains hate the moon