You may remember from the staff page that music producer Noriyasu Agematsu came up with the idea for Symphogear in part as a way to flex his musical muscles. And that over-the-top style of his that convinced Nana Mizuki to team up with him is all over these tunes. They’re bombastic tracks, with soaring string melodies backed by a pounding electronic beat; it’s hard not to get hype when a song starts playing during a battle or concert. Each character has their own slight variation on that style – Chris has heavy metal guitars, Maria’s got epic chorus lines, Tsubasa’s got traditional Japanese instrumentation – but it’s mostly dressing on top of a very sturdy J-Pop formula. The guy knows how to write some catchy, fist-pumpingly exciting J-Pop.

But what really makes Symphogear unique, is that the songs don’t just play over the fight scene, the characters are actually, canonically, singing the songs themselves while they fight.

It’s a subtle difference, but the results are unmistakable. You see, they actually have the voice actresses re-record parts of the songs in every fight, in-character, so that they can sing the song as if they’re throwing a punch or swinging a sword or lifting a heavy object in time with the action on-screen. This does so much for immersion, so much for setting the tone, so much for making the fights feel more larger-than-life but also real. And honestly, some of the battle versions have stuck with me more than the actual recordings because of how much more impact the delivery has - the original version of Radiant Force will just never be able to measure up to that iconic Aoi Yuuki ROAR as Hibiki punches a space shuttle down a mountain.

It just has so much more punch to it.

Now what makes all of this even better is that this wasn’t the original intent for the show. Originally, it was just supposed to be character songs playing over the fight scenes. I’ll let Agematsu himself explain what happened.

Okay, how fitting is it that? In this show about how our inability to fully understand each other is at the very core of what makes humanity special, the defining mechanic of this show arose from a misunderstanding. *Chef’s Kiss* It’s perfect.

But the fight scenes are just one outlet for the music here – Kanade, Tsubasa, and Maria are all idols, and there’s at least one absolutely spectacular concert scene in every season (except AXZ). And it’s not like your other idol shows where it suddenly goes all uncanny-CGI-dancing on you. These are glorious 2D animation showcases, against stunning dynamic backdrops. This is what they brought on the Macross Frontier team to teach them how to do, and they get better at it every season. I don’t show the one from XV in the panel because I think it’s best to go into it with fresh eyes, but here’s the one from GX, which is also amazing: 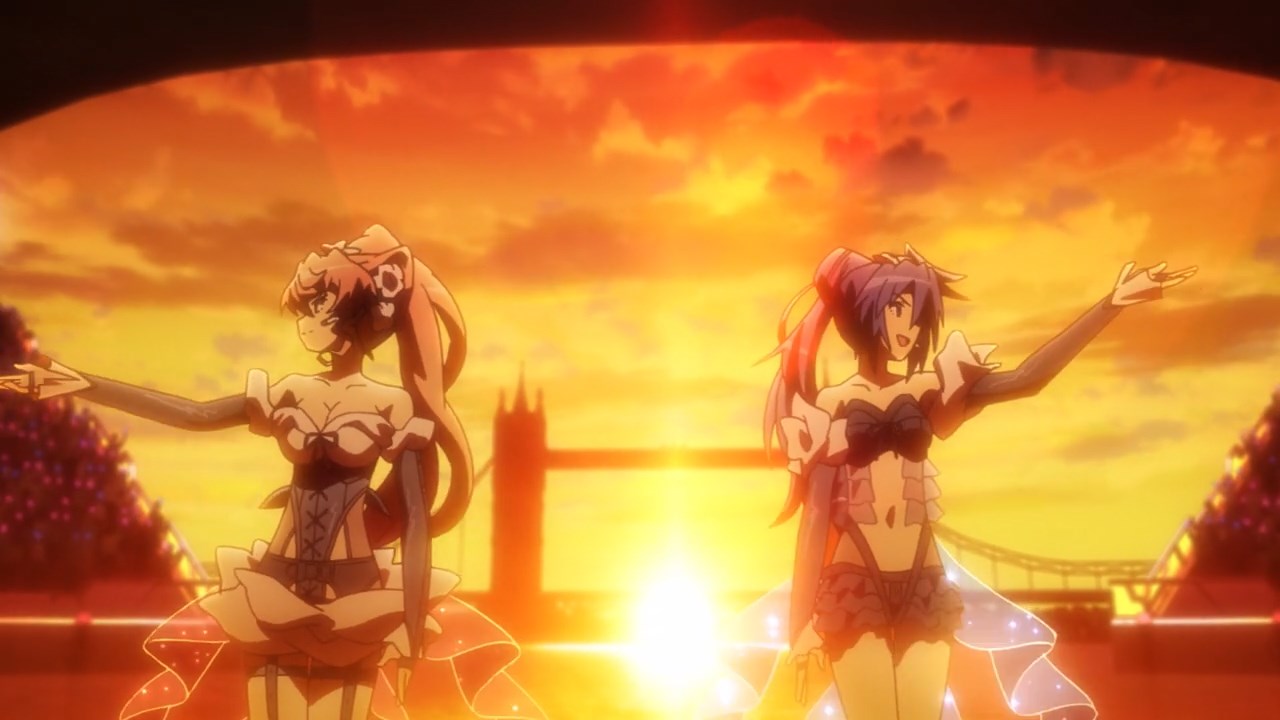 So that was awesome, right? Like, cooler than most concerts you could see in real life, right? Well Nana Mizuki thinks so, too, and I’m convinced she’s using these concerts as a reference for what to do for her live shows, because when she goes out to perform, she’s out there doing this: 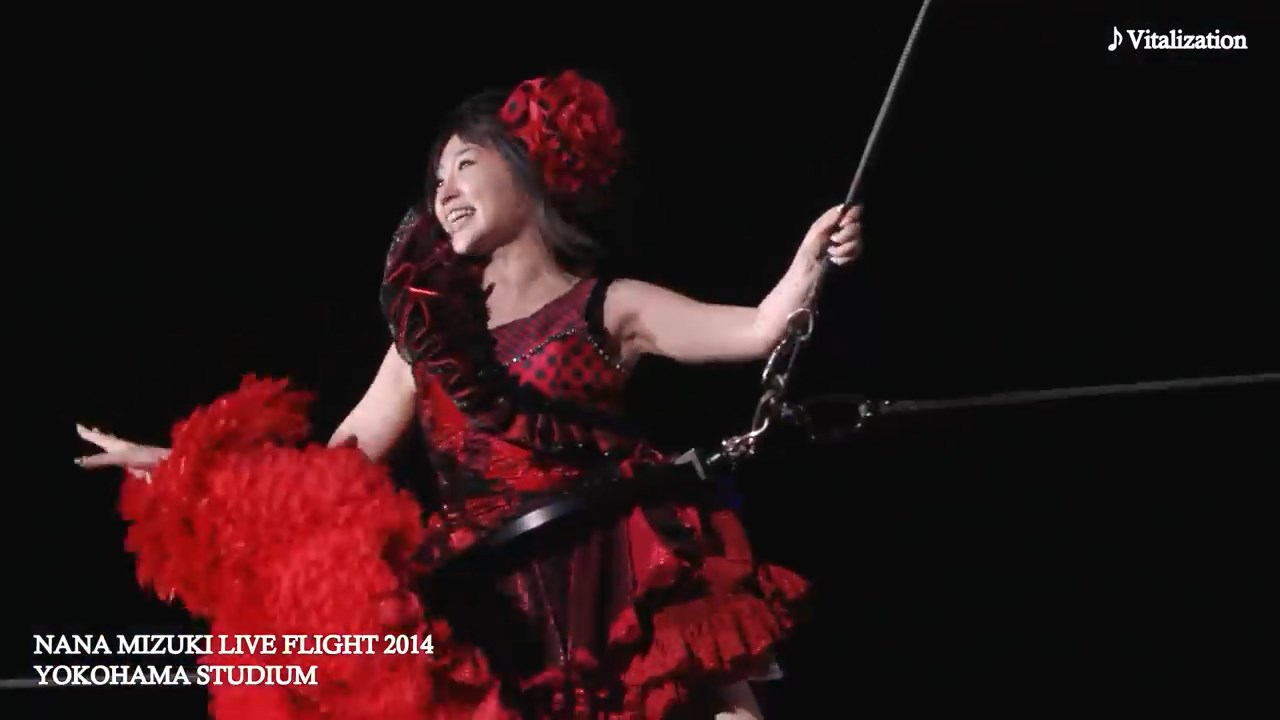 How do you become that cool, I just can’t even imagine, Nana Mizuki is literally Tsubasa I swear. Now that is shooting the moon.

And Ayahi Takagaki, who voices Chris and sings the ED themes, regularly performs them at her shows alongside songs from her idol career and showcases of her classical training.

But personally, one of my favorite parts of the show is when several characters get together and sing a song as a group – I’m just a huge sucker for songs that are basically musical conversations between multiple singers. Chills every freakin’ time, man. It’s like listening to an all-girl version of JAM Project.

Anyway, in addition to selling CDs of all these songs, the cast also put on a live concert after every season, where they dress up as the characters and sing all their songs from the series that just ended. And there’s just so much energy and passion in these venues, it’s incredible. I own them all on Blu-Ray, so in the panel I would play a clip of all of them coming together at the end to sing Nijiiro no Flugel, to showcase both the energy of the crowd and all the Gears singing together, but that’s not easily available online. So instead, I’ll link to some highlight reels that the Symphogear youtube channel posted for their 2016 (GX) and 2018 (AXZ) shows. 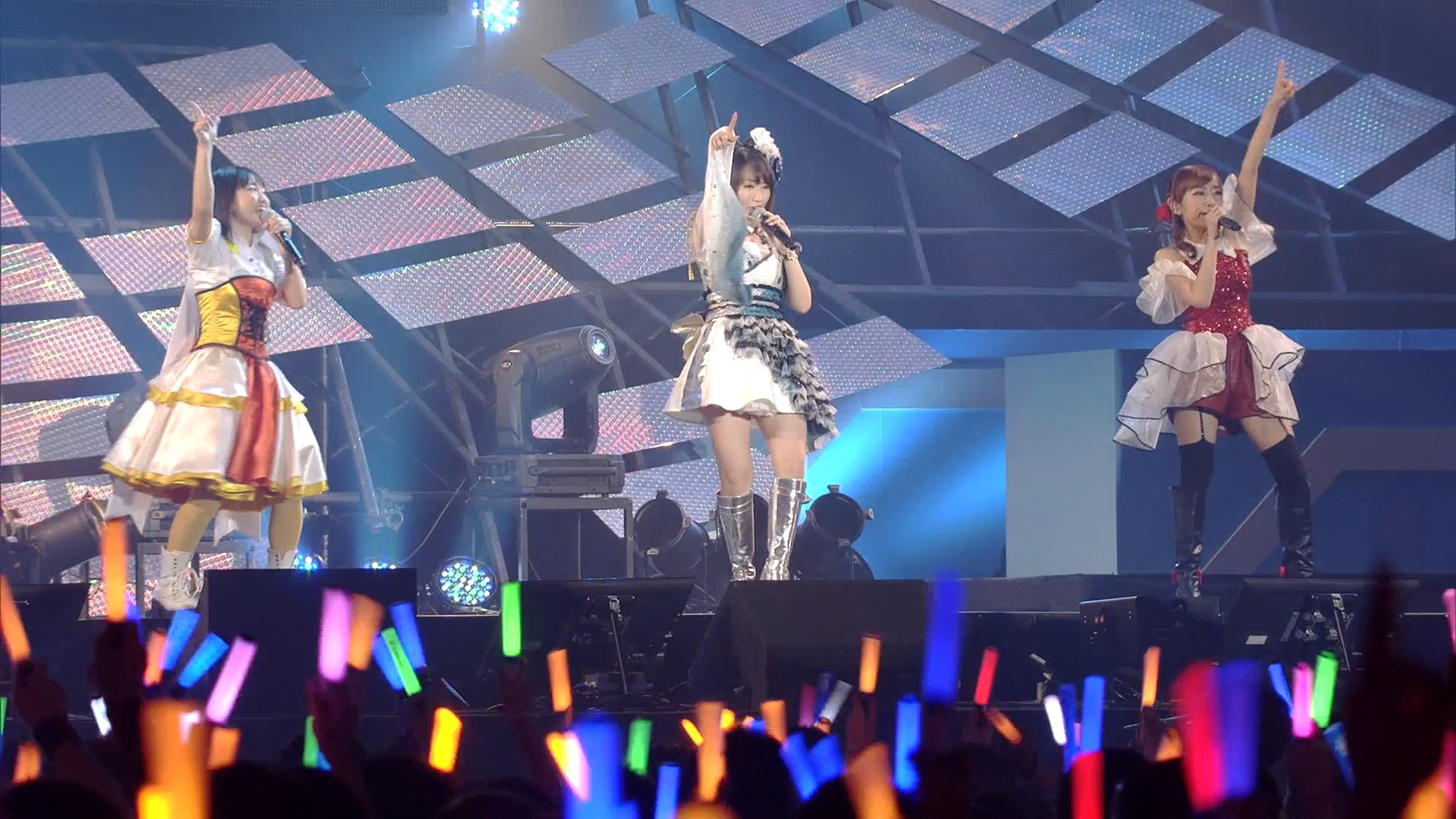 It still gives me chills going back and realizing that the duet version of Hanasaku Yuuki with Hibiki and Saint-Germain happened on-stage at the AXZ live show before it ever appeared in the show - with how significant that song is to their arc in the show I can’t even imagine what a huge deal that would’ve been to see live.