I’ve been following Symphogear since it first came out in 2012, and it was originally just this weird little show that popped up out of nowhere. It wasn’t based on a manga, it wasn’t (yet) part of some big multimedia franchise, none of the creative staff involved was all that well-known and hadn’t done much work in anime before. It was just some random show on the seasonal anime chart that nobody really knew anything about until it aired – the chart even spelled the name wrong (it’s Senki Zesshou, not Senhime Zesshou). We were trying to figure this out in real time, with no idea what it was going to become, and it was breaking all of our collective brains. I picked it up on a whim because I liked the name, and fully expected to drop it like so many other flavor-of-the-month season shows, but of course I couldn’t stop. Imagine going blindly into some unassuming season show and it turns out to be SYMPHOGEAR, like, what????? This tweet was the best I could muster after 13 episodes.

But then it got a second season.

The production problems were gone.

The writing and the plot were even more unhinged.

The cast doubled in size. 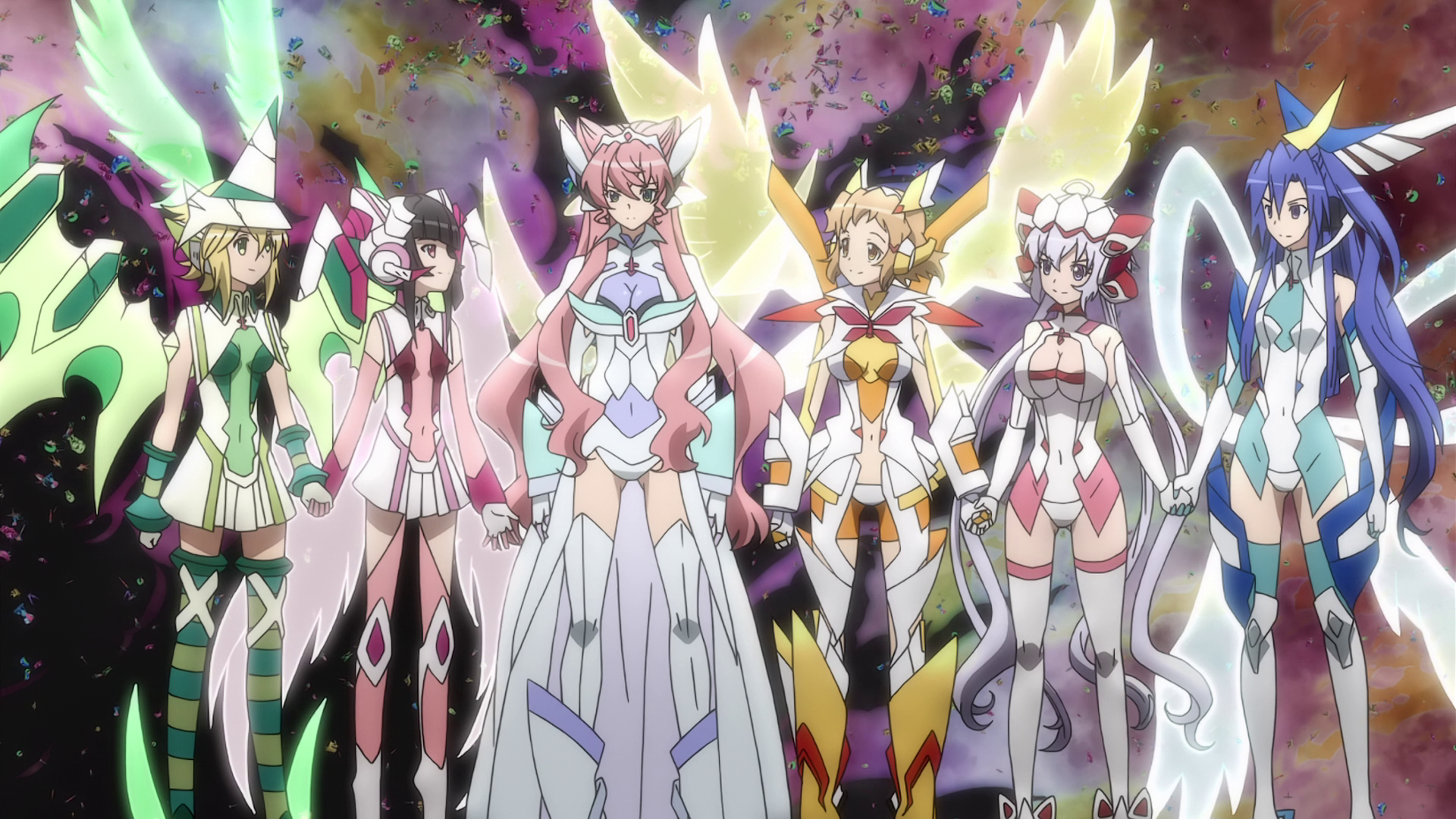 This was for real.

And when the first episode of GX came out, I think that opened the floodgates.

GX was the first season to be simulcast on Crunchyroll, opening it up to a wider audience that didn’t know where to track down fansubs (The first season did simulcast on Funimation for a short time, and to this day I still call climax/superb songs “swan songs” thanks to their translation, but like Milky Holmes, it didn’t last long there). 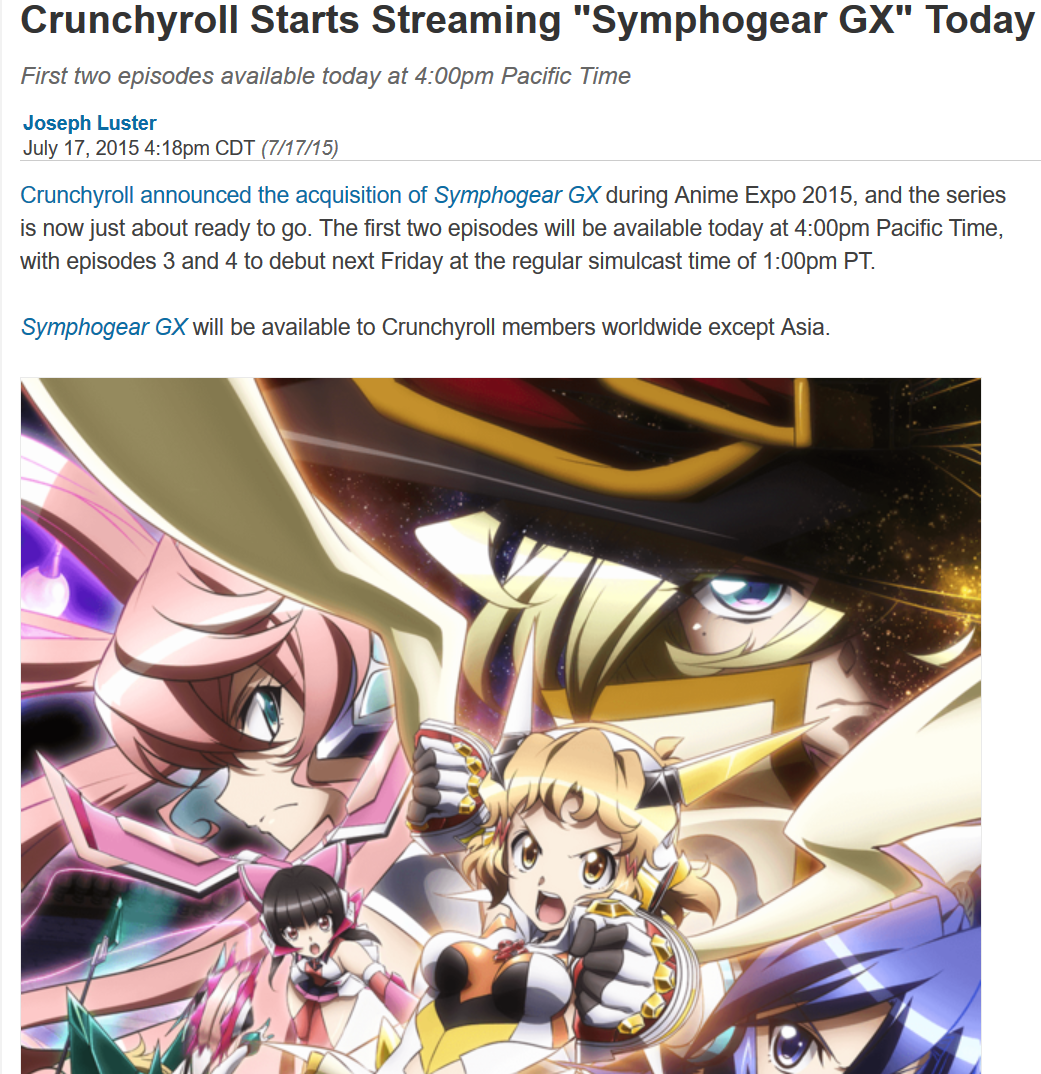 GX’s bold intro scene with Hibiki punching a mountain was the stuff of legends and an incredible gateway: it was a concise, self-contained, easily-shareable introduction to newcomers that really encapsulates what makes Symphogear special. And with all that, plus the first two seasons finally streaming alongside it on an official platform, it took off. 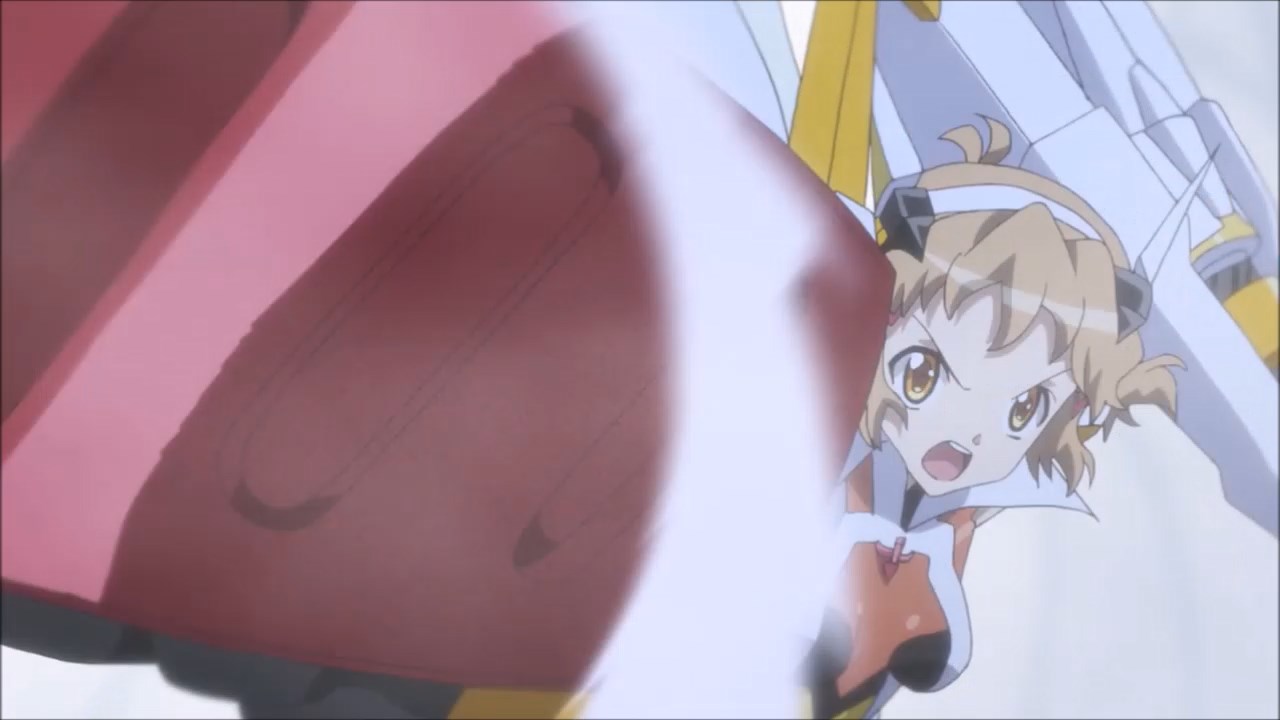 And by the end of GX, it was announced for TWO MORE seasons.

Here the momentum started picking up, and I started hearing more and more people talk about it which hit a peak by the time AXZ came out and everyone was yelling at Miles on Twitter because Crunchyroll wasn’t streaming it. Having to rely on fansubs in 2017 was a bit of a hiccup, but by the time XV rolled around and Crunchy announced that they’d managed to pick up both it and AXZ, the hype was unreal.

It almost seems a shame that it’s ending now, as it’s entering its peak of popularity. I’d be curious to see if there’s an announcement for some kind of movie or spin-off or other continuation down the road, though it may be for the best to leave this story alone, as much as it pains me to say it.

But it’s been so wonderful to watch it grow over the years, this little show that could. It’s not often that you get a large anime-original franchise like this, and the fact that Symphogear even exists, much less that it became what it is today, is enough of a miracle to send Carol on a murderous rampage. So whatever the future holds for Symphogear, what it’s brought to us have been nothing short of a blessing. Since 2012, it’s charged ahead down the only path it knows.

The most direct path.

Determination clutched in its fist.

All the way through to its end on 2019’s fateful September 29th.

A song that resounds in all of our hearts,

And that showed us a light even god could not know.

And in the name of the almighty Nana Mizuki we pray: