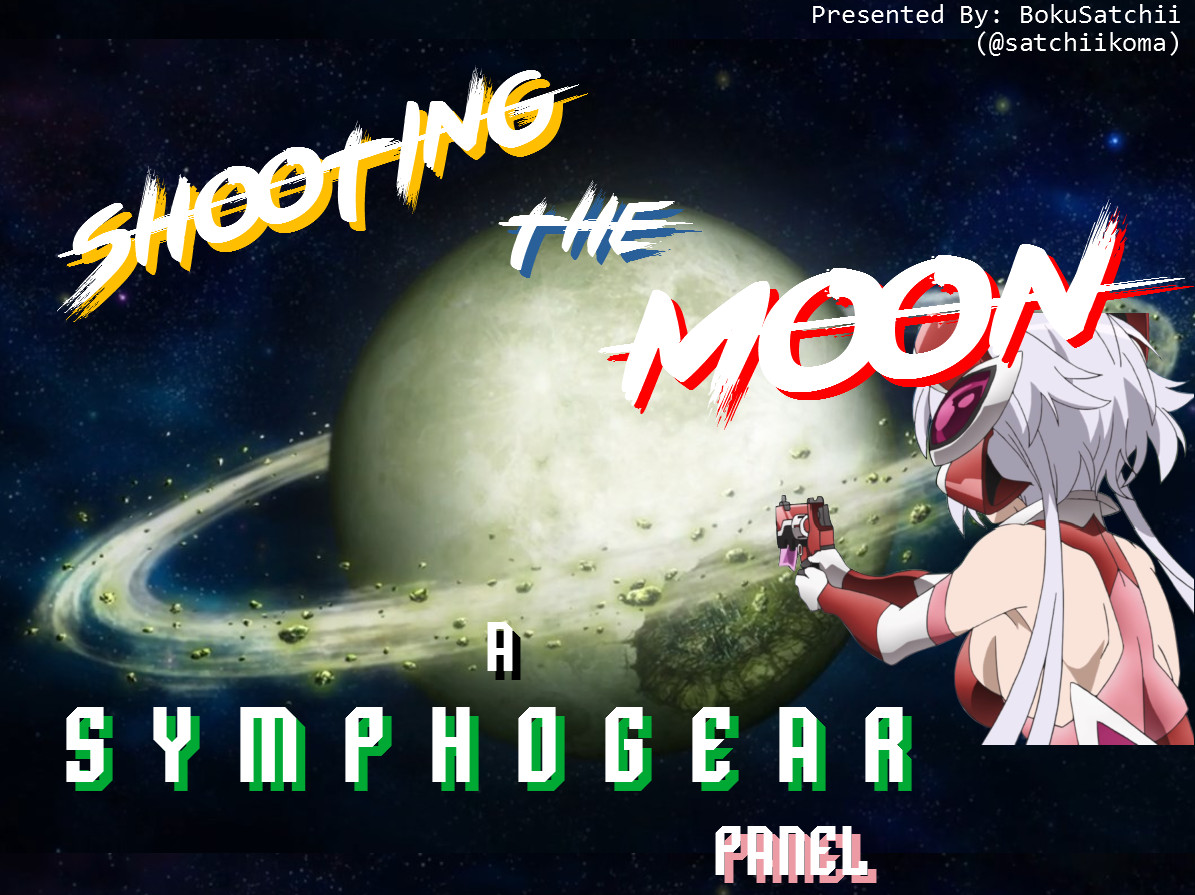 Wait haha what am I doing, you can’t answer me! LOL

So yeah, anyway, I LOVE SYMPHOGEAR so much that I decided to present a whole panel about it at cons. It’s called “Shooting The Moon: A Symphogear Panel.” If you were at Anime Weekend Atlanta in 2019, maybe you saw it! (that’s why I thought I could ask you a question LOL) A whole bunch of people asked me if I could make a Youtube video of the panel, because they wanted to look it up online later. That would be SO COOL! I’ve never made a Youtube video before! But my panel has lots of clips from the show in it, and Youtube would probably take it down EVEN THOUGH THERE IS NO COPYRIGHT INTENDED. So I had to find a way to put it online somehow. I have an anime blog (check it out it’s really cool ;-) ) but this is too much for just a blog post, it needs to be something ~special~.

Anyway, if there was any kind of tribute, any kind of home for this content that Symphogear deserved, it was a late-90s/early-00s geocities-style web shrine, complete with ridiculous table layouts, tiled animated gif backgrounds, unreadable red-on-black text, and of course, the obnoxiously sincere exuberance of a dweeby 13-year-old learning how to express themselves in the era of America Online. The site will mostly just be a transcription of the panel content, but I’ll also try to throw in some new stuff where I can. If I can work up the motivation I might even keep updating it, we’ll see!

If you like the site, feel free to send a tweet to @satchiikoma to let me know! I don’t have a guestbook so this is the best I’ve got!

For a taste of the live experience, here’s a few shots that Hibiki superfan @ladyinverse managed to take of the intro clip from my panel!
(Source 1, Source 2)

So, the panel is called “Shooting The Moon.”

To shoot the moon, figuratively, is to take a risk and go all in on the most ambitious possible goal. To run completely contrary to all established rules of success in hopes that you can surpass them if you just GO FOR IT hard enough.

To shoot the moon, literally, is to fire a giant laser cannon at that stupid glowing orb in the sky looking down like it’s better than us, because who does that big stupid rock even think it is anyway?

Symphogear is an anime that does both of those things.

“I remember nothing from Symphogear, it’s just something that happens to me every few years”

-My friend, on what they would like to see in a Symphogear panel

Symphogear is not just something you watch. It is something that happens to you.

It’s a show that’s always trying to be the most… well, just the MOST, all the time.

It’s in a constant state of being as extra as possible, and looking for ways it can one-up itself in the most spectacular fashion it can imagine.

It’s a show about overcoming trauma through friendship, how to support and protect the people you hold dear, and how music is a universal language that allows us to express our innermost selves in a way that words cannot.

And I love it.